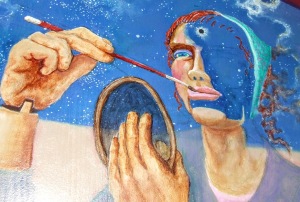 In my classes and posts I quote a lot of statistics about homeless folks, and most of them are only worth the paper they are printed on. (Get it? They aren’t printed on paper… ).

We want statistics, because we want to quantify “the problem”, which is homelessness. If we can box it, measure it, then we can reduce it or eradicate it. Were it so simple. Homelessness isn’t something we can distinctly measure and wipe off the map. So much of homelessness is an attitude, both of the homeless and of housed neighbors. And trying to measure homeless folks is like trying to count the drops of water in the ocean.

Here are some of the issues those who gather statistics have:

1. Homeless folks don’t want to be found
In many cities, homeless folks and camps are targets. Targets of the police, of housed neighbors, of people who take advantage of them, of highway workers and others. Many groups automatically see them as criminals, or at least as “undesirables.” Folks on the street who would like to live a peaceful life find that hiding is the best way to do it. If the police can’t find them, then the likelihood is that those who wish to count the homeless can’t find them, either.

2. Street numbers change
Not only do the numbers of homeless change from year to year, they change from month to month. Most of the homeless have family, friends or jobs that will help them get off the street. Sometimes the right friend just finds out, a family member’s heart is tugged just right, or a family just needs to save enough money. In the summer, friends and family feel less for those on the street than in the winter. And there are cycles of time when landlords evict their tenants, and times when they don’t. If certain government programs for the ill, the mentally ill or the poor are cut, then homelessness increases. On the other hand, if shelters or programs develop, homelessness might decrease. Or it might not. So a single count every two years is woefully inadequate to give us a picture of homelessness at any other time.

3. Who counts as homeless?
Finally, statistics are remarkably different depending on who is being counted. Recently, the Department of Housing and Urban Development posted statistics about Homelessness, counting only those who are on the street. The Point in Time count every other year counts people sleeping on the street, those in their cars and those in shelters. Others will count those forced to live in motels, on friend’s couches or in other overcrowded situations. Some will actually compare one group with another to try to show that they have almost eradicated homelessness. Utah, for example, was able to claim that they reduced homelessness by 91 percent by changing the definition of who is “chronically homeless”. So numbers might not make sense, especially compared from one agency to another.

We need the statistics in order to give us a general idea of the scope of the issues involved, or to determine trends. But exact counts are not possible, unfortunately.