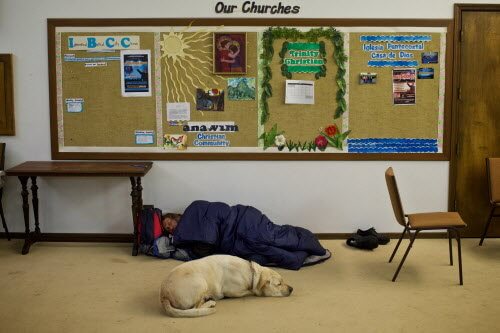 Marcine grew up abused by her father. She left home early, got a job and worked hard. Someone had lied about her and so she lost that job. The stress of her life was too overwhelming, so she sat in her apartment, unable to seek another job. “They won’t hire me because I was fired from my last job.” Soon she was evicted. She wouldn’t go home to her father, so she was homeless.

She went to a local church and obtained a tent, a sleeping bag and a tarp. A homeless man showed her a safe place to stay. She didn’t feel safe, so she got a boyfriend who would protect her. After a while, when his trauma showed through, he would beat her. She left him with her tent and sleeping bag, leaving her only with a blanket.

She slept in a park, under a bench. She stayed there all day except when there was a meal going on. She had no energy to do anything. A neighbor found her and said, “You are so lazy! Look at the trash under the bench! Get up and find a job!” She rolled over and stayed under the table.
The first neighbor told a second that there was a homeless person under the park table. The second said, “But there are children that play in that park! Homeless people use drugs! And are thieves! This person is dangerous!” And they called the police.

The police came over and looked at her under the table. There wasn’t much trash there, just a small pile. There were no needles, and one empty beer can. But she couldn’t stay there. “This is a park. You aren’t allowed to stay here.” She was so exhausted, she ignored him. “Ma’am, you will have to leave. Now.” She just laid there. “If you don’t get up, I’ll have no choice but to arrest you.” In the end, that’s what he did. Arrested her for trespassing on city property. As he was driving her in, he said, “I hope this teaches you a lesson. You are a good girl. You just need some tough love.”