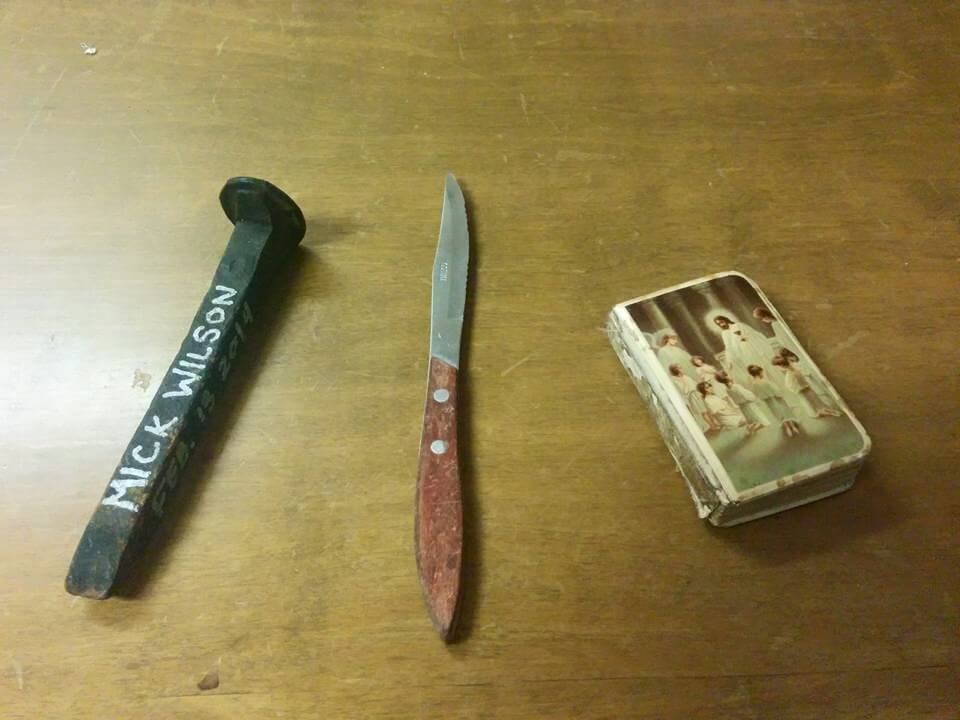 I keep three items on my desk.

Okay, I keep a lot more than three items there. Frankly, most of the time, my desk is really cluttered. I just cleared it away to take the picture above, so you might THINK that I keep a clean desk. Total exposure, here.

But these three items keep a deeper meaning than the pile of paperwork, visionary notes from Jeff and piles of Scripture readings for the next worship service. They remind me of real people, real lives. Reminding me that I am not just working with statistics or faceless nobodies. That the real person is more complex, and often hidden.

The first item is a rail spike with the name, “Mick Wilson” on it. Mick was a quiet man who often came to the Red Barn to be with his friends, and to obtain a few items he needed for the week. One day, he was walking along the railroad track with a couple friends and they heard a train coming from a distance and moved a good distance away from the track. Then his dog, Yoda, ran away from him, breaking his hold on the leash, rushing toward the oncoming train. Mick ran after him, just catching up with Yoda in front of the train. They were both hit and died.

This spike reminds me that, even if they don’t look like it, many of the homeless are heroes, ready to sacrifice themselves for those they love.

The second item is a knife, which was taken from a boy who was threatening another with it on the church property. We’ve only had a few knife fights in the twenty years that I have been working with the homeless. But in this case, one of the folks who often comes to the Red Barn tackled the kid with the knife, took it out of his hand and held him down until he calmed down. In the past I had trouble with this same person who offered security.

This knife reminds me that the very people I have problems with will later save someone’s life, if I would give them a chance.

Finally, there is a prayer book. This book belonged to a man came almost daily to the Red Barn. Although he was homeless, he helped so many people and tried to give people a place to rest and meet their needs. He didn’t like to talk about religion or the Lord, and I guess I assumed he was agnostic. He had a series of strokes and died. After he passed away, one of his close friends gave me this prayer book and said that he would pray out of this book on a regular basis.

This prayer book reminds me that we never know who has deep waters of connections to Jesus. We must never assume.