The term “anawim” in Hebrew means “the poor seeking the Lord for deliverance.” Although the term is only used some 23 times in the plural, the idea of God’s people being poor and delivered by Him is found throughout the Scripture.

God has always taken the ones in the position of powerlessness, and placed them in the position of strength. In that, he displayed his strength all the greater. We could come up with our own “hall of faith” and discover that salvation history is just filled with losers.

Hagar: Her mistress told her to have sex with her master—so she did. So why does her mistress beat her when she got pregnant? When she ran away, an angel (first angel in the Bible!) told her to return and live under her mistress’ abuse—so she did. When her mistress had a son of her own, years later, she was told to pack up and leave—so she did. Because of her stubborn obedience, God made her descendants into a populous desert nation.

Lot: Of course he took the best land when it was offered—who wouldn’t? How was he to know that Sodom was slated for destruction by God’s immorality wrecking crew? Now here he is in the middle of the desert, destruction all around him, his wife fit only for a saltshaker, his daughters thinking incest is the best thing since sliced bread…. Well, God made it up to him by allowing him to be the father of two great nations. 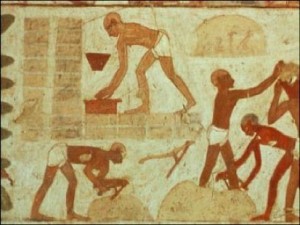 Joseph: So he boasted a little bit and humiliated his brothers. Is there any reason for him to be thrown, starving, into a pit, sold into slavery, falsely accused of sexual misconduct, and cast into jail? Apparently God thought he’d been through enough, so he made Joseph Prime Minister of the most powerful country in the world.

Tamar: She married one brother. He died. He left her no kid. She was given to the second brother. He died. No kid. Daddy wasn’t taking chances on the third brother. So she put a veil on, loosened the top buttons on her blouse, donned a garter, and targeted daddy, and he didn’t know who she was. After her pregnancy was obvious, daddy was ready to kill her. Until she proved to him that daddy was the daddy. God makes her the matriarch of the kings of Jerusalem.

The Children of Israel: They were enslaved in Egypt for generations. All of a sudden, they remember God and cry out to him. Ten plagues. Dead men everywhere. Crossing the Red Sea without needing to change into bathing suits. Voila! Instant deliverance. Then he makes them his select nation for all time.

Rahab: Jericho sex-worker, destined for destruction with the rest of her city, who was more scared of Israel’s God than her own. Backed the right horse, and was given asylum. Oh, yeah, and God made her an ancestor of the Messiah.

Gideon: A coward hiding in a hole until an angel proclaims him “mighty warrior!” Three hundred men against thousands, a few lanterns against swords and chariots— God would only pull him out if he faced overwhelming odds against him.

Jephthah: Important father, but his mother was a prostitute. Dang, bad luck—he was kicked out of the family. He became leader of a band of outlaws. But when an army attacked his community, he was the only one who could save them. He would do so only if he gained the respect of the community.

Samson: Devoted to God before he was born, he was made strong by God’s power (no steroids necessary), as long as he didn’t touch wine or cut his hair. Unfortunately, there was no requirement to keep his zipper shut. After playing with the wrong woman once too many, he was weakened, enslaved and tortured. Finally, God allowed him one last shot to destroy his enemies—as long as he died in the process.

Ruth: A family from Israel goes to Moab and the sons marry the wrong wives—Moabites (Terrorists to the early Israelis). When father and sons die, the mother goes back home, and her one ex-daughter-in-law (dirty terrorist, trying to make right with God) insists in coming with. She adopts to the new culture and the new God like a fish in water. Her new husband is rich, and they become the ancestors of the kings of Judea.

Hannah: Her co-wife thinks she is just soooo important, just because she’s got lots of kids and Hannah doesn’t. Hannah is so forsaken, she goes to the temple to pray and is rebuked for being drunk. But God hears her prayer anyway, and her son becomes ruler and priest of all Israel.

David: The important priest names little David king, but no one knows it (frankly, no one would believe it). Yeah, he kills a giant, and slays some thousands of enemies, but the king still isn’t impressed. He tries to kill David and David runs away for a few years. In nowhereland, David leads a rag-tag band of nowheremen, making nowhere plans (except to keep running from the king). Finally, the king dies and David is made king.

Who are these people? Why does the Bible tell story after story about these nobodies, these ne’er do wells? What makes them so significant? Of themselves, nothing. These are the insignificant, the ones who would never amount to anything, the ones whose only luck was bad. But they are significant, only because God chose them. God’s eyes search throughout the world, looking for the lowlifes, the outcasts, the ones who story ended before it began. He looks for those who have no hope in this world. No chance for success, no opportunity to make the grade, no one to give them a hand out, let alone a hand up. And then God allows them to draw on his strength.

These are the anawim.

They are the beloved of God.

Want to know more about the anawim? Join us in our conversation about the Poor in the Bible

Or check out Steve Kimes’ book Anawim, which is published in a blog format (ongoing)