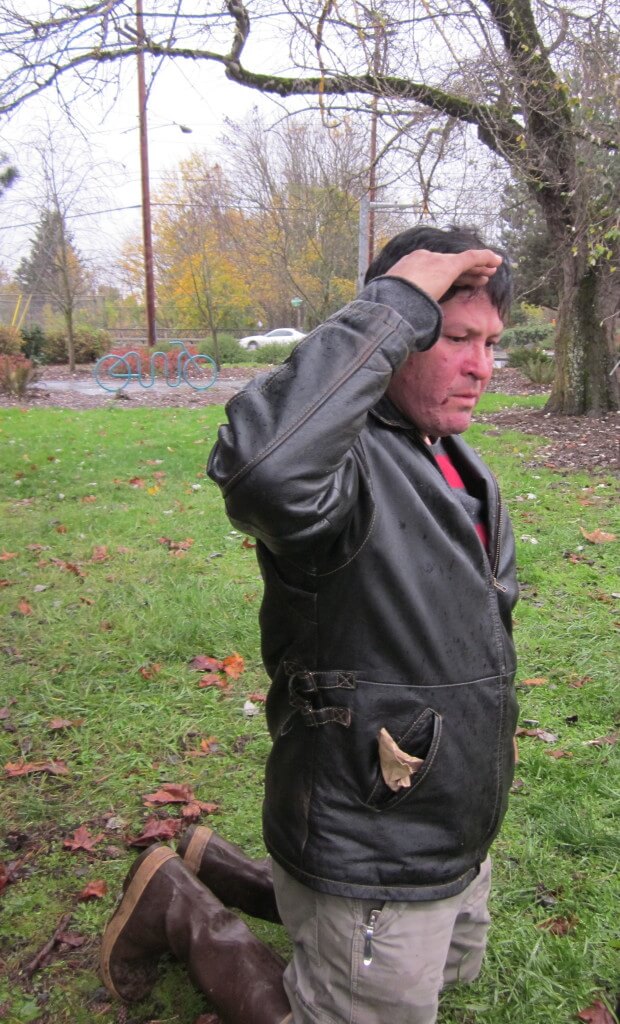 “What I want to know is, “ Mark asked pleadingly, “why has God forsaken us?”

Mark and his wife Diane, a homeless couple, has just been forced to move from the camp that they had peacefully dwelt in for years. They have nowhere to go. A summer storm blew through Portland the last couple days and because they had nowhere to legally set up their tent, they were soaked the other night, hiding for cover, and now they have no dry blankets or clothes.

They came into our church’s day shelter yesterday freezing. We were able to give them a warm meal and a change of clothes and some dry bedding… but Mark’s question lingered. He said, “I’ve been praying. I’ve been seeking God for help. Why won’t he help us?”

Honestly, I gave some pious answer about waiting and God’s timing isn’t our timing. But I wasn’t really being honest to him. I woke up at 6 this morning with his question haunting me. I couldn’t get any more sleep, so I want to be honest with you today:

The reason Mark isn’t being helped by God is because God has already given the power to help him to His people, the church, and the church isn’t interested.

It isn’t that the church isn’t interested in justice. But they would rather take sides in the Israel/Gaza conflict rather than be there for their neighbor who lives in their community. Which is odd to me, because it seems that the point of the parable of the Good Samaritan is that we are to show mercy to the one whom we come across, not write a blog post for them, nor re-post a video that touched us about justice. Justice isn’t about making a public position, but about creating a context where people are free to live.

I’ve been reading Walter Breuggermann’s book Peace the past couple weeks, and in that brilliant short book he makes the point that there is a difference between order and justice. Order is what Pharaoh had, with his slavery and his taskmasters. God had to reach in and make chaos of that order so that He might establish justice. Order is what we have in our cities, and the city councils keep order by creating laws and policies that move the homeless out of people’s sight, that fundamentally make it illegal for those human beings to exist. The police, many of whom believe the homeless to be naturally criminals, will move them on, dehumanize them, take their possessions, and even arrest them for the crime of being unable to pay rent.

The church of the United States can stop this. They can create justice for the homeless in their communities. Here are some simple steps. Not all the steps are easy, mind you, but creating justice never is.

In the next two weeks, we will be posting how Anawim is creating justice and what you can do to make your community a place of justice for the homeless.