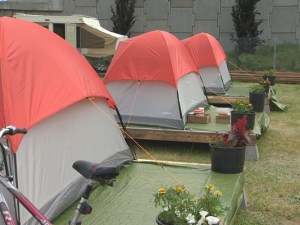 Another camp for abused women we helped to establish

This year has been amazing, so far. Really, I’ve never seen anything like it.

It really started when Portland’s mayor declared homelessness an emergency crisis, and the mayor started making radical changes in his homeless policies. He made a camp official, and declared that he would make more official.

I visited the camp and quickly saw that there was something wrong. Twenty five people could stay, but the other 60 people were going to be pushed out, almost all of them without an opportunity to fit into the community. So I decided to do something about it. I got some leaders of the rejected people together to organize them and to create an official camp. We chose another property, and established an organized move with other advocates before the date for them to move in January. That camp is called Forgotten Realms and it is being declared another official camp in city literature.

In March, the city of Gresham decided to amp up their efforts pushing the homeless all over the city. After a month of police harassment, they succeeded in their efforts to push most of the homeless out of Gresham. Some activists and I heard that Gresham was doing a final vote to fence off 60 acres of property where the homeless were recently living to take away the largest area of property where the homeless lived in the city. About 20 of us went to city council to object and to stop the vote, if necessary, not to stop it, but so the homeless could be fairly heard. Seven people, including myself, was arrested for chanting and interrupting the vote. Our trial will be in the fall.

Meanwhile, in Portland, more homeless camps were being formed, wanting to know how to be official. A number of us started to meet to try to establish an organization to form and guide official homeless camps.

In the next month, homeless folks and activists met together at Anawim to form a civil rights homeless camp to affirm the state law which says that a homeless person cannot be prosecuted for camping. So Mary Maguire and others got together to establish a camp on city property with no trash, no late night noise and no illegal activity. The police tried to harass and move them on, but they held their ground. Now they are an established camp in Gresham.

All this year, on top of my regular Anawim activities, my partners and I have been trying to help the homeless communicate with the local cities, to have better relations with their neighbors, and to affirm their rights. We’ve been helping the homeless survive, to be good neighbors and be outspoken citizens. We are not doing this in opposition to the cities (although the governments sometimes feel like that), but to help them listen to their poorest citizens and to help them.

I know I haven’t written as much, but I’ve been busy. Busy trying to offer just a little bit of help to our homeless partners. They’ve been helping too, keeping our church running. We’ve been collecting and distributing 3500 pounds of food a week to the poor in our community. We’ve been organizing deliveries of food and meals to camps. Really active, just trying to help.

And we could use your help. Honestly, we’ve been so busy spearheading efforts to help that we’ve been struggling to keep up with our ongoing expenses. Some folks have been helping us with immediate needs, but we are heading toward a financial crisis.

In our hour of need, if you can help, we’d really appreciate it. Keep us fighting for the rights of the homeless. Keep us pushing forward for everyone to have a safe place to sleep, to help more homeless people interact with their neighbors to make better cities.

If you want to help, please look at our donation page: hogansheroesfanclub.com/donate