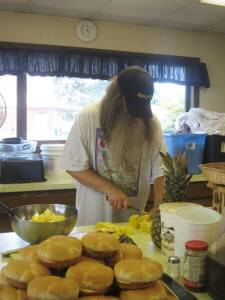 Tim was an alcoholic, but through support and a job he stopped drinking. He lost his job and ended up on the street, but he determined that he wouldn’t go back to alcohol as a “solution” to his problems. His friends all drank, and constantly offered him some, but he refused.

One day, he was in a park and he saw his sister with her children playing by the swings. He walked away from his homeless friends and waved at her, giving her his sweet smile. She saw Tim, immediately gathered up his niece and nephew, and walked quickly to her car, leaving before he could catch up to them. Tim walked back to his alcoholic friend, pointed at his bottle of vodka and said, “Here, give me that,” and drank it all down.

As Tim drank for years after that, his health deteriorated severely. His blood pressure was so high that doctors were stunned that he was still alive. He would spend a week at a time in the hospital. To save his life, a pastor friend of his asked him to stay in his house. Tim wasn’t sure that he wanted to, because he knew that to live in the pastor’s house was to stop drinking and he wasn’t sure he was ready to. But his homeless friends encouraged him, even demanded that he stay in the house. No one wanted him to die on the streets.

Tim agreed. He moved in, traded his beer for Mountain Dew, and he regained his health. He volunteered at the church and encouraged his friends. He relapsed a few times, but he remained sober until he died three years later of his heart giving out.

Life is a balancing act. Some are acrobats and can balance on their own. Most of us need friends and supporters to hold our hands in order to keep our balance.