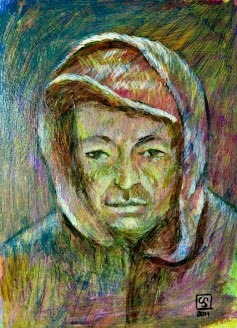 After having a short interaction with a worn out guy who was wandering aimlessly on this wet Portland day. He was pretty altered, pupils like pin holes. He was trying to use someone’s phone. I offered mine and asked what number he wanted to call so I could dial it. He lost his train of thought and started asking me if I do certain drugs. He listed off some of the worst ones first and I thought dang… he’s really deep in that mess. I said, “I used to do some drugs, but never messed with powders, anything you have to shoot up, or immediately destroys your brain.” And it came out pretty easy…

“Have you ever tried Jesus?” He sobered up in a moment looking right at me and then fell back into his stupor. He began to say, “People that love God…. that have the Holy Spirit in them………they………”

Again he lost his train of thought. I told him that Jesus has taken me places no drug ever has. I thought about the brave people that had the courage to speak to me about sin, about the love of Christ, and best of all that read me scripture when I was so lost. So… I opened up my bag. Grabbed the Bible and read him scripture from a pamphlet I got from Anawim entitled God’s Mercy, which I used as a bookmark. :)

What good would any words do a person in that state? More than ya think. His tough shell began to melt and the true suffering of his daily walk began to breath. Like a child I gave him the scripture covered pamphlet and told him, “put it in your bag and save it for later.” He dropped it after a while and a girl at the bus stop said, “Hey you dropped that.” He reluctantly picked it up. The bus arrived and he wanted to follow me. “Where we going?” he asked in doorway of the bus. I smiled and said, “I don’t know where you’re going, but good luck.”

You can lead a horse to water, but you can’t make em drink.

I pray he get some rest and begins the long, yet worthwhile journey of shedding the poison of the world in exchange for the peace of God’s love.