Around 1170s in Lyons there was a wealthy businessman named Peter Waldo (his last name could also be pronounced Valdes). He was a firm believer in Jesus and wanted to do all he could to obey him. So he asked a monk to translate the words of Jesus into a language Peter could understand. The monk did so, and so the book called Sentences was completed. Peter studied this book day and night, amazed at the teaching of Jesus.

Among the teaching he read were these:

“Anyone who does not surrender all that he has cannot be my disciple.” Luke 14:33

“The Lord appointed seventy and sent them in pairs ahead of Him to every city and place where He Himself was going to come. And He was saying to them, “The harvest is plentiful, but the laborers are few; therefore beseech the Lord of the harvest to send out laborers into His harvest. Go; behold, I send you out as lambs in the midst of wolves. Carry no money belt, no bag, no shoes; and greet no one on the way. “Whatever house you enter, first say, ‘Peace be to this house.’ If a man of peace is there, your peace will rest on him; but if not, it will return to you. Stay in that house, eating and drinking what they give you; for the laborer is worthy of his wages. Do not keep moving from house to house Whatever city you enter and they receive you, eat what is set before you; and heal those in it who are sick, and say to them, ‘The kingdom of God has come near to you.’ “ Luke 10:1-9

After studying the teaching of Jesus for years, Peter determined that he needed to obey Jesus. He sold his possessions, sold his business, provided all his resources for the poor and began to preach the word of Jesus. Immediately, some of the leaders of the church were upset with him. They tried to stop him from preaching, saying that only the appointed bishops could preach God’s word. They tried to find all the copies of the Sentences and burn them. They even killed the monk who translated the Sentences for Peter. 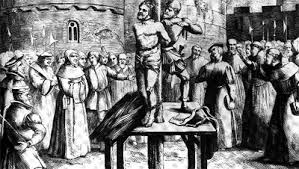 The Waldensians grew from a tiny movement to one that filled all of Europe. Eventually, the persecution against the Waldensians became so great that whole armies were sent out against them and thousands were killed and many more were tortured. It was illegal to be a Waldensian all over Europe. However, the Waldensian movement survived and exists today in Italy. They have since joined with the Methodist church.

A historical note: Peter Waldo wasn’t given the name “Peter” until many years later. He was known in his time as “Valdes”