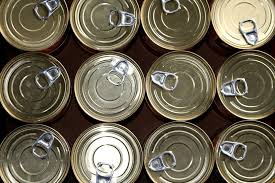 I was at Fred Meyers today and I was just doing some light shopping. As I walked through I was thinking of that passage that said a “A days wages for a Loaf of Bread” because I was looking a loaves of bread that were selling for $8 to $12 per loaf and Milk was $5.29 for a gallon. A dead uncooked Chicken was selling for $11.

So I got my non organic food and because it is Seniors Day I got out for under $20.

So as I was passing the cat food Isle I saw the sticker “10 cans for a dollar– no limit” and this old man and this old woman were busy filling a couple of bags with cat food. I heard the old man pipe up to his wife “O Hun, don’t get that flavor it gives me terrible gas”. In all they had about a 100 cans.

A little while later there was a call for cleanup and a bag of rice had fallen and burst open. With push brooms and sweepers all was collected into a trash can and hauled away. About 30 lbs and the haulers were being tailed by these two girls.

The can was just outside the employee only door and unattended. Suddenly one of the girls was on her cell phone for ladies descended and in moments the rice was collected and transported out – the – door with excellent precision.

So this activity continued especially in the produce section it is like a highly trained secret force. Some Chinese, some Russian some young and some old and all women. It was a sight to behold.