Monday morning as the sun rises; Hammer, Ankles, Pastor Steve, and Holy Diver are sitting on sofas in their North Portland living room, eating a concoction called breakfast pie and discussing the Bible. Breakfast pie includes bacon Diver found in a dumpster weeks ago and stashed in the freezer. Diver is a lifelong dumpster diver and on-again-off-again drug addict. His current drug of choice is Christianity. After the Bible discussion (which is short, frank, and pleasant—Pastor Steve, who doesn’t wear shoes, is a minister to the homeless), Diver gets his bike in order and then, while the rest of Portland is just waking up, makes his daily dumpster rounds. He’s been scrounging a living from Portland’s trashcans for 20 years. But unlike most people who have lingered in Portland’s back alleys for that long, Diver is still mentally sharp enough to explain all that he’s seen.

The first stop of the day is a North Portland assisted-living facility, where Diver delivers a hard-boiled egg to a schizophrenic friend. The friend doesn’t eat much unless someone stops by to encourage him and the whole egg-delivery routine is part of Diver’s new Christian approach to life. “I want to help other people, I feel like I have a gift, through God, to provide for other people,” says Diver. Digging through Stumptown garbage, Diver finds food and clothes for Pastor Steve’s entire little homeless ministry commune….

For a while after that, he slept out in Gresham with a tight-knit community of homeless people and was a “Satanic crackhead” before getting into a rehab program at Central City Concern. He wound up at Pastor Steve’s after relapsing. “To say that I have 100 percent faith in what the Bible says and that Christ is my savior — I would have never ever thought that. I’ve been through the whole gamut of being atheist, Satanist, drug-addled. But I consider myself an intelligent mammal and I think I’ve evaluated all the information correctly.”

~Diver still lives in our community and has recently gotten back in touch with his son and daughter and seems ecstatically happy. 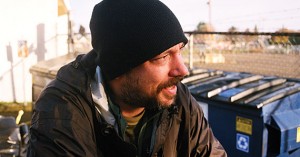