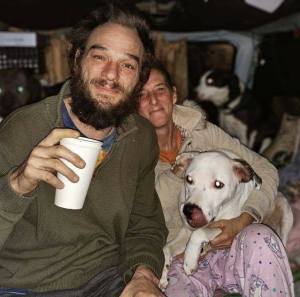 Karen Burch lives in her van. She is threatened by the police, by others who pass through her neighborhood. But she endures. And she writes.

Karen is an articulate homeless writer who communicates the reality on the street, and how folks on the street support each other to survive. Occasionally she will have a post to give us a flavor of what it’s like on the street.

Sometimes I wish I could do more for some of the people out here.

Like the young man who just joined our camp. He fits what we look for in family and campmates/housemates. Doesn’t want drama; wants to get where he wants to go at a pace he can handle. He’s a veteran he deserves better then the streets.

Our family member Gypsy Wanderer wants to work and hopefully will be called here soon as the weather is better. If not then he is going to start his disability (which he should be on).

Paul and I never seem to make it to anything we need to do when it comes to that stuff something always comes up. Doing better at some of it making him take time. The need for a stable neighborhood for all of us is becoming paramount things like last night make feeling safe and truly able to sleep a difficulty when we all have PTSD and other issues.

Something I learned quick on the streets: DON’T lose who you are and don’t lose your will and drive to accomplish what you want.

It may take time to get there but at least you don’t lose yourself and become what they accuse you of being. Losing yourself is far worse then anything else that could happen to you out here. You become what they say you are because they beat you down and run you down till you are to tired to fight.

Unfortunately it sometimes backfires and instead of caving and becoming some of us stand up taller and start fighting back.

I have rights. My house is my van. My HOME is my husband and our animals. I AM a CITIZEN of this CITY and of this COUNTRY.