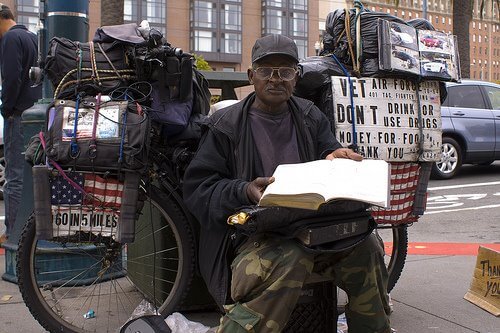 Today I was at the VA hospital having my eyes checked out and all is well.

So after the check up, I decided to treat myself to a donut and coffee. Did you know that they have TEXAS donuts. This one was a full 10 inches across and 2 inches thick and glazed. O’ the bliss…….and so instead of coffee I went for a Mocha.

Hey if you’re gonna be decedent, BE DECEDENT!!! So there I was stuffing my face and enjoying every blissful mouthful.

Now in the VA’s cafeteria there is this giant window looking out on to the main floors parking and drop off point. Outside was a guy in a wheel chair missing a leg up to the hip and his left hand was partially gone as well. He bummed a cigarette and a light.

He tries to explain that he was rolled the other night and he has been here trying to get some help.

Then this cop chose the wrong path and says “You’re no vet. You’re a bum.”

Now I was prevented from entering into this fray because of the wall of glass even though I could clearly hear all that is being said. But I did let out a gritted teeth prayer for intervention.

Apparently God heard, for a retired First Sergeant, who was a Marine, comes up and asks, “What’s the problem?”

The guy in the chair said “I am a Marine but I was robbed the other night and I don’t have ID so they think I am a bum.”

The First Sergeant whips out his iPad and says, “Name!”

The First Sergeant turns to the cop and ask for his card. “This is no Bum. This is a Marine, who gave his all and this nation owes him big time……..and you sir are a coward.”

Then he stepped behind John’s wheelchair and began pushing, heading for the front door. I met them and explained I had witnessed the whole affair. I joined the company and we went to the Inspector Generals’ office where what normally takes weeks was reduced to about an hour and John had his ID back and all the paper work for his disability and orders for a flight back home to Atlanta Georgia courtesy of the Armed forces of the United States.

Anawim believes that all vets should be treated with dignity and assistance from the nation who called them to sacrifice their all. -SK