In a blink of an eye, our life can change and take us down a path we never imagined we could ever be on. 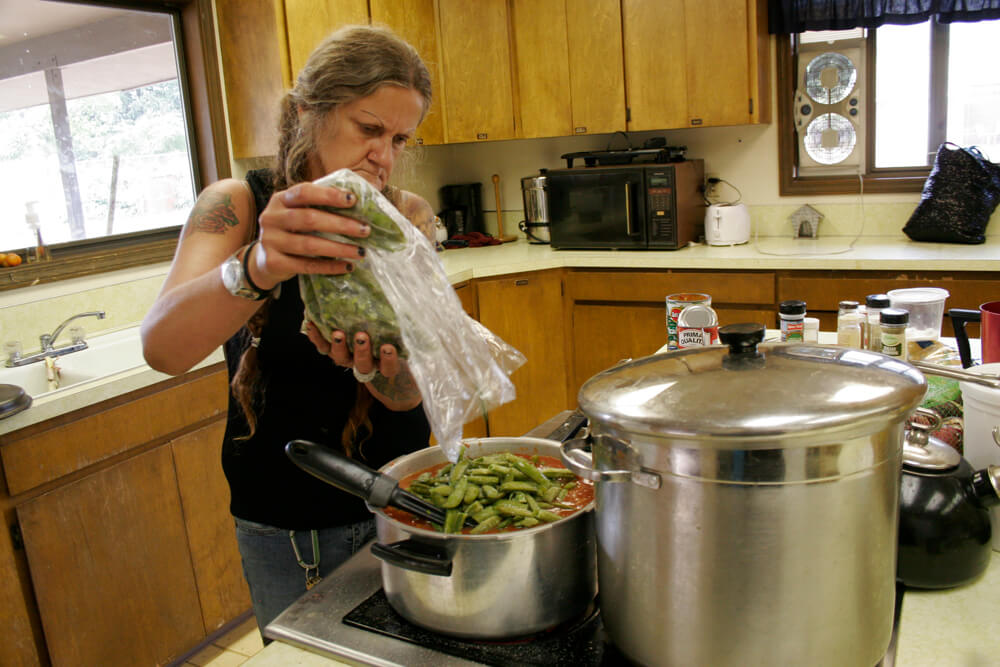 Above: Pat prepares a meal for herself and others, using the Anawim Christian Community’s Sanctuary kitchen. Photo by Mary Anne Funk

Pat never expected to be homeless. Like many of us she never thought it could happen to her. She had a steady self-contracting business for over 11 years. She was always able to cover her expenses and while she didn’t have a lot in savings, she had some money put aside. But on December 8, 2013 after an accident in which she was hit by a motorist left her with a disability and after a series of incidents that were out of Pat’s control, she found herself homeless and penniless, living out of her car with her three dogs.

While living out of her car, Pat found sanctuary, community, hope, and purpose with Anawim Christian Community, in Gresham. Although at times her sanctuary has been disturbed by the police and by the housed community, located near the Anawim sanctuary. At times her hope challenged with continuous events that have occurred while she was already at a low point in her life. At the time of the photo, above, Pat was living out of a tent on the sanctuary’s grounds. She began staying in a tent in an area of the sanctuary, after her car broke down. It was towed because she couldn’t afford to fix it or move it.

Pat was able to pitch her tent on the Anawim Christian Community Church grounds and up until recently, she was able to stay there without moving her tent. However, due to city wide crack downs on no camping law ordinances, and complaints from the local home associations located around the Church, in regards to them letting the homeless community sleep on the grounds, the Church was cited for letting anyone camp on the Church grounds for more than 72 hours. Anawim is currently working through things with the city and the neighborhood associations so they can continue to provide a place of sanctuary.

Soon after leaving the Church grounds, a heavy wind destroyed Pat’s tent, leaving her and her dogs without shelter again. While staying on the church grounds, Pat had safety and rest.

She is a mother like figure to others around her. Pat is doing her best to get back on her feet and trying to survive on the streets while waiting to have what she needs to get back into an apartment. She is no longer able to work in the same capacity that she did before her accident. She is waiting for disability and she is currently volunteering time at Anwim in exchange for some of her needs being met. She is a lead volunteer in the clothing closet and often times prepares meals for the other volunteers and the homeless community who come to Anawim.

Below: Hear Pat’s story: In this clip Pat talks about her breaking point that led to her being homeless and the uncertainty of where she will stay at this moment in time.

If you would like to help Pat with a tent or a place to stay with her dogs, please contact Anawim Chistian Community to see how you can help her and others. Pat could also use a trailer for her bike so she can carry her belonging and her dogs.