Meet Genevieve Cochran, a lady with a heart of gold and an energy level that most 18 year olds can’t keep up with. Genevieve was a volunteer with Anwaim Christian Community for the last two and a half years. Over this last year, I have gotten to know this woman and have learned so much from her. She is filled with wisdom, determination, love, and empathy.

Everyone Genevieve met at Anawim, was left feeling loved and respected by her. She is driven by a desire to help others and a calling she says comes from God. “This is God’s ministry, ” Genevieve told me several times. “The people on the street are God’s people” 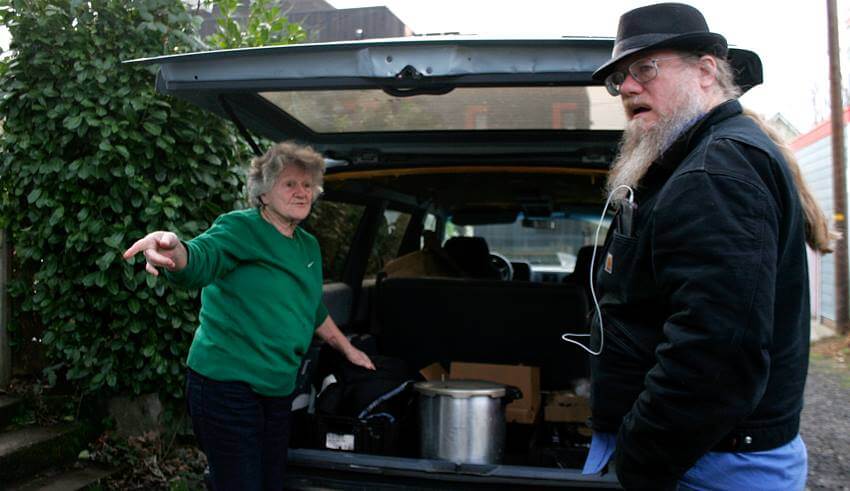 February 4, 2015 – Photo by Mary Anne Funk
Genevieve Cochran asks Pastor Steve Kimes of Anwaim Christian Community, what he has room for in his van as they prepare to head over to St. Johns, for their Wednesday meal service.

For the last two and a half years, Genevieve spent 8-10 hours a week traveling in her van, which has worked just as hard as she has, as she volunteered with Anawim Christian Community. “It’s an old beater,” Genevieve said, “but it has done a fabulous job for us and gotten food to people who need it: both in St. Johns and Gresham and carrying maybe 800 lbs. a week from the food bank to the Church. Considering it is 25 years old, it is amazing.” “Us elderlies are doing well,” she finished saying laughingly.

Genevieve began volunteering with Anawim Christian Community in June of 2012, after following them for over a year online. 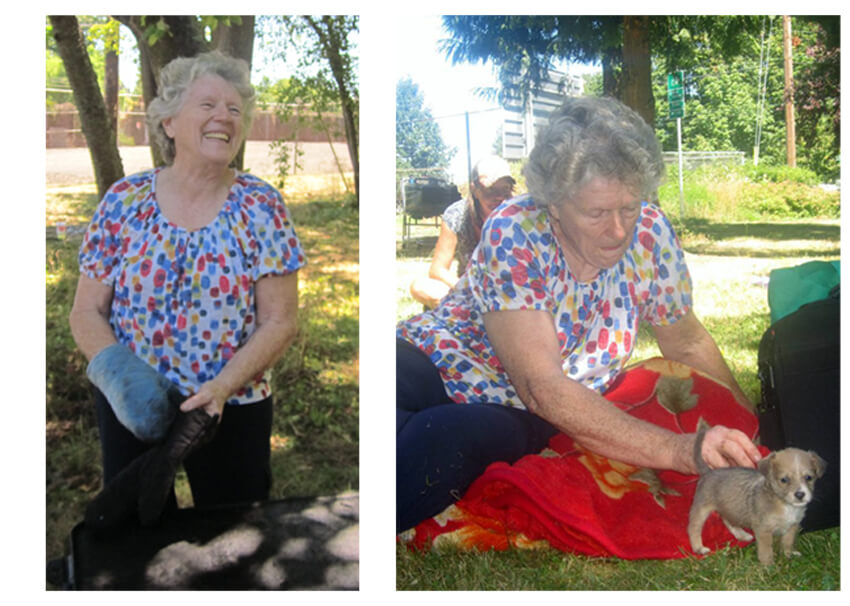 Photos courtesy of Steve Kimes and Samantha Childress
Genevieve serving and spending time with the outdoor ministry that was started by Samantha and Timothy Childress.

One morning she woke up in Washington State and heard God saying, “O.K. you’ve been following these folks for over a year, it’s time for you to get off your duff.” That is just what she did. She became involved with Anawim through Timothy and Samantha Childress when they were serving sandwiches and bottled water to the homeless community, at a park in St. Johns. Genevieve began bringing additional food to go with the sandwiches, and when the cold weather hit, Genevieve began bringing hot soup.

Over the last two and a half years, she donated her time to a majority of programs and services that Anawim provides. Photo by Mary Anne Funk
Genevieve and Steve pick up food items from The Birches.

She went with Pastor Steve Kimes to the gleaners on a weekly basis. The food that is picked up from the gleaners is distributed to the homeless community and working poor community whom Anawim serves in North Portland and Gresham and to other organizations who are working with communities in need. Photo: Mary Anne Funk
Genevieve sorts clothes that were left in front of the red barn at the Anawim Sanctuary in Gresham, Oregon

She donated countless hours to Anawim’s weekly clothing closest, in Gresham, and she managed to get it fully organized and to the point of sustainability. 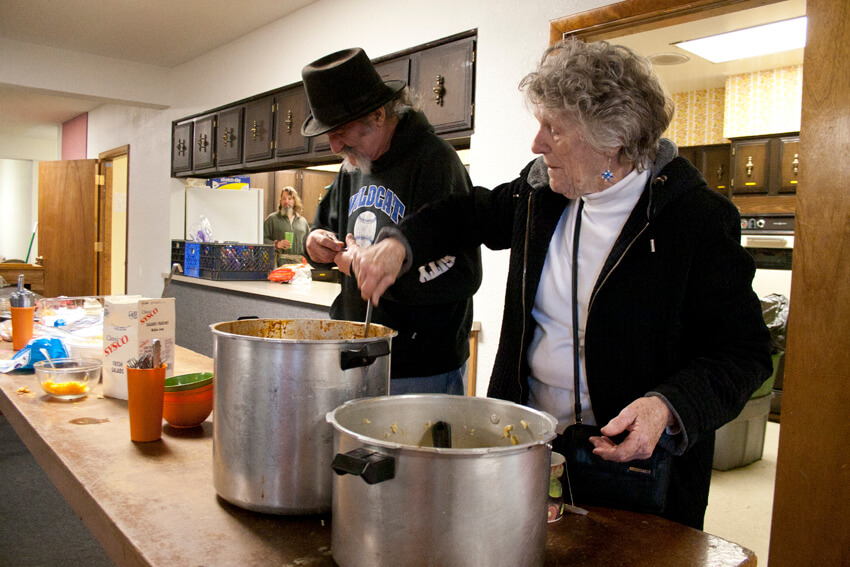 January 14, 2015 – Photo by Mary Anne Funk
Toby, left, sets up the serving table as Genevieve stirs the spaghetti sauce and noodles that she prepared for the Anawim meal service in St. Johns

Every week she prepared multiple meals and delivered them to the meal services in Gresham and St. Johns, where she would also sit and eat and talk with the community members who came for the services and meals.

God has blessed her Spirit with the gift of taking care of others. Photo by Mary Anne Funk
Genevieve Cochran receives love from the other event volunteers at the Free Back to School Clothing Giveaway at the Anawim Sanctuary in Gresham. It was an event that required much planning with little time to do it. “We only had five weeks to pull this together and this couldn’t have happened without my volunteers, two who are homeless” said Genevieve Cochran.Left to Right: Amber, Genevieve, Pat, Barb, Kristi

Genevieve recently moved from Oregon to Tennessee where she will live and take care of her son who is in renal failure. She is a constant in our society and continuously taking care of others. During our interview, I asked Genevieve, you take care of everyone else, who takes care of you? “God” she said in a quiet tearful voice, “He is there, always”

Genevieve, God used you in Portland in a mighty way and I know He will continue to use you in Tennessee. Anawim thanks you for the years you volunteered with the community and for being a constant in our society. We miss your energy and Spirit here in Portland.

I recently had a chance to interview Genevieve, while riding in her van on our way to help her prepare for her move. Listen to her interview in which she shares what she has learned, what she will miss, and what her hopes are for Anawim.