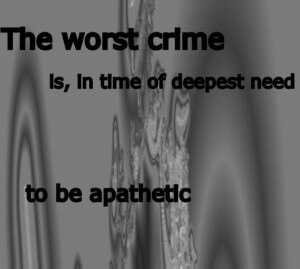 Ron Ferber was attacked. That is how he felt, and there was nothing he could do to stop it.

He was a homeless man who dealt with mental health issues and mostly kept to himself. He dumpster dived for a living, recycling cans and bottles and eating what decent food he could find. He was also a collector of various items that he found. He had one tub full of jewelry he found in dumpsters, another plastic bottle full of bottle caps. Another container was full of old coins. He would take whatever others thought were worthless, collect them and protect them. Once a container was full, he dug a hole near his camp and buried it.

He suffered the indignities of all the homeless. There are always difficulties finding a safe and clean place to go to the bathroom. Some would yell at him for being in or close to a dumpster, and he would move on. Some would look at his obvious homeless attire and state of hygiene and tell him to get a job. All of this bothered him, but there was one indignity that he couldn’t abide: harassment of the police.

As far as Ron was concerned, he shouldn’t have to be approached by the police at all. First of all, he was a citizen of the U.S. Secondly, he was law-abiding. He didn’t break in anything to steal, most of the dumpsters he went into he had permission to go in. He kept to himself, and bothered no one who didn’t bother him. But the police would seek him out. They would ask for his I.D. and ask him questions as if they assumed he was a criminal whom they had to keep track of. Perhaps he could go a month without them stopping him and putting him through the ritual of humiliation, but they would always find him again.

He couldn’t stand it. He couldn’t live with it. After one time of being questioned by the police, he announced, “The next time the police question me, I’m going to kill myself!”

The next time he was found, he was dead in his sleeping bag in the midst of his camp.

Unfortunately, this is not the end of the story of Ron Ferber.

One of Ron’s acquaintances found Ron, dead. He wanted Ron’s body to be treated with respect and buried, but he feared the police too much to call 911 for the authorities to care for his body. So the body was left.

Rumors among a few people spread that a body was lying there, just a stone’s throw from a busy street in Gresham. A couple of meth addicts, housed in downtown Gresham, decided to check it out. Just for fun, they brought a video camera. After they found the body, they immediately opened his mouth and found what they were looking for– fillings. They took a pair of pliers and pulled out all the teeth with fillings, videotaping the whole scene, enjoying themselves greatly. They sold the fillings for some twenty bucks, enough for a single hit of dope.

They had so much fun doing this illicit deed that they couldn’t keep it to themselves. So every time someone came to visit them, they would sit the person down and show them the videotape, laughing all the while. Finally, one person was so disgusted with the abuse of a corpse, with the disrespect of a human being, he decided to do something about it. Again, he didn’t want to get too involved himself. He was homeless and did not want any contact with the police. So he came to my house and told me about it, hoping that I would have compassion for this poor man.

That very Sunday afternoon, he and I went to the body. I wanted to see the body before I called it in to make sure that it wasn’t just a rumor. I took a flashlight and peered into the wood box that Ron called his home. Outside the box, the smell wasn’t as bad as I expected. As I looked in, I couldn’t see much at first. Just a sleeping bag and a rotten banana resting on it. Then I looked closer. That was not a banana, that was his arm, shriveled and darkened by heat. I pulled the bag down a bit and flashed the light to his face. It was all decayed, the flesh mostly gone, eaten by various animals over the months he had laid there.

I backed away from the camp and called 911. The police came, and the coroners. I left just as the news crew arrived– it must have been a slow news day for them to have bothered covering a dead homeless man discovered in the brush. Of course, after the news of the corpse abuse came out, there was certainly something newsworthy about that. Each of the corpse abusers received a few months in jail for their fun.

The question I have is not how could we have helped Ron not be homeless so that he could have avoided such indignities. Rather, I am asking why our society feels it necessary to dehumanize the homeless to such a degree that anyone could think that treating the homeless in this way– with humiliation, with abuse, with neglect–would be acceptable.

Should any human being be treated in this way? If not, then why do we allow the homeless to be dehumanized to such a degree during their life so that some can feel right to treat them with humiliation after their death? What caused this abuse? The desire for drugs? The treatment by the police? Or the attitude of society as a whole about the homeless?