Today I was helping a neighbor with a project. After awhile he took a break and I wandered into backyard/ forest to see how my grapes were ripening.
So I picked a small cluster and began to munch on them. as I was gazing at the yard I became aware of a bit of scurrying in the deep shadows of my forest. And then out came a nice plump grey squirrel. He did not show any fear at all and came up to with in 6 inches of me. I plucked a grape of my cluster and held it out and Mr’ squirrel placed his left fore paw upon my knee and reached over and took the grape. 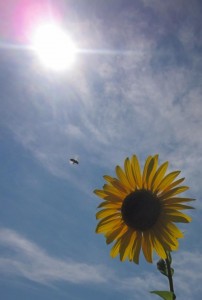 Now I should mention that I was sitting on the back steps when this all transpired. So Mr. squirrel turned the grape over a couple of times sniffing it and then stuffed it into his mouth chewed and swallowed. I offered another and the same procedure repeated itself again and for three more grapes. Then Mr.Squirrel turned and scampered off back into the trees and then up the maple.
I was about to get up when Mr. Squirrel showed up again. This time though he came baring gifts. Well a gift. I was presented with a green Walnut. He came right up to my lap and deposited it and then step back about 5 feet to see what I would do. I took the nut and turned it over in my hands and then put it in my Pocket. Then the squirrel turned and went back into the tree.