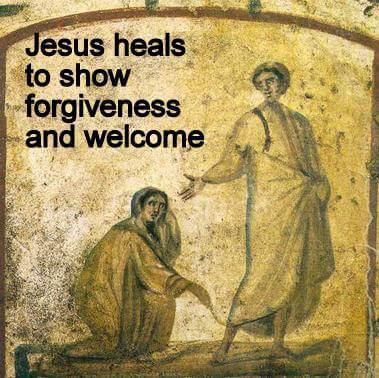 After some days, Jesus returned back to Capernaum and the people of the town heard he was back home, which was Peter’s house. He taught the gospel to those who were there, but the house became so packed that people stood outside the door. Four men came, carrying a man so sick with AIDS he was bedridden, but they weren’t able to bring him to Jesus because of the crowd. So they climbed up on the roof, tore it apart and lowered the sick man through the hole on a cot, right in front of Jesus.

Jesus was impressed with their faith as shown by their tenacity, so he said to the man with AIDS, “Son, your sins are forgiven.”

Some intellectuals were there, analyzing Jesus’ teaching, and their mouths frowned and questioned, “How could he talk like this? He is doing God’s job. For who can forgive sins except God?”

And Jesus knew immediately what they were frowning about and he said, “What do you doubt? Do you think it’s easy doing my job? Would you try saying ‘Your sins are forgiven’ or ‘Get up, you’re healed?’ But I’ll tell you what, if you really want to know if the Son of Man has the right to forgive sins, then…” So he turned to the man on the ground and said, “Pay attention—get up, pick up you cot and go home. You’re healed.”

And the sick man immediately got up, picked up his cot and walked out of the house. Every eye in the house widened, and they honored God for it: “We haven’t seen anything like this.”